Lately, quite a few Milky Way images taken from airplanes have been popping up in social media. Nevertheless, many people are still astonished that it is possible to capture the Milky Way from a fast-moving plane without star trails. It is, therefore, time to look a bit deeper into the topic of airborne astrophotography.

The concept of airborne astronomy is not new and has been applied by professional astronomers since 1957, when Stratoscope 1, a high flying helium balloon equipped with a 12-inch telescope took high-resolution images of the sun. Later, the focus shifted to infrared, UV, microwave, Gamma- and X-ray astronomy, as the dense lower atmosphere blocks these electromagnetic frequencies

In 1965 the first telescope was mounted on a jet aircraft. The NASA Galileo Airborne Observatory used a converted Convair 990; destroyed in 1973 in a mid-air collision. It was followed in 1974 by the NASA Kuiper Airborne Observatory (KAO) on a Lockheed C-141A Starlifter that operated until 1995.

NASA’s current observatory saw first light in 2010 and is called Stratospheric Observatory for Infrared Astronomy (SOFIA). It is an 80/20 partnership of NASA and the German Aerospace Center (DLR) and operates an extensively modified Boeing 747SP aircraft carrying a 2.7-meter (106-inch) reflecting telescope.

As these professional instruments prove, it is possible to do astrophotography out of a flying jetliner, but how is this possible without producing star trails? Let us look into this.

That speed is fast, but it is only about 1% of the 107,000 km/h (64,850 mph) at which earth is moving around the sun and not even this velocity is causing star trailing, because the stars are very far away. In other words: As long as you do not fly with warp speed, linear motion is irrelevant.

What Causes Star Trails in a Long Exposure?

Star trails are caused by angular motion, i.e., the rotation of your camera or your mount. But you are using an extremely stable tripod and still get star trails after a few seconds, right? That’s because your tripod is standing on a huge rotating base called Earth, which rotates 360° in 24 hours. To take long exposures without star trailing, either you must limit your exposure time, or you have to use a tracking device that counters earth rotation.

So all is good; you have to set up a tracker on your next long-haul flight, and you can expose virtually forever? Not quite.

An aircraft is not flying in a straight line; it follows the curvature of the Earth. If you are flying westward, the speed of the plane counters the effect of the Earth’s rotation while heading eastward makes things worse.

So how do the rotational velocity of earth and an airliner compare? With its circumference of 40,000 km (24,900 mi), the equator rotates with 1670 km/h (1038 mph). This figure decreases with increasing latitude, as the circumference decreases to 0 at the pole. Mathematically the rotational velocity is the cosine of the latitude multiplied with the Earth’s speed at the equator.

At mid-northern or southern latitudes, the Earth rotates at almost the same speed as the typical ground speed of commercial aircraft. This matching of ground and direction is the reason why, on a westward flight, you land at nearly the same local time as your time of departure.

So you can even leave your tracker at home, because the aircraft acts as an airborne tracking mount on westbound flights, while you better get some sleep on eastbound routes? In theory, yes, but unfortunately, reality makes things a bit more complicated again.

Turbulent air causes short term non-linear motion of the aircraft. Even if you managed to fix the camera to the aircraft structure, this makes the stars jump around in your image, causing erratic trails or blurred stars.

Dutch roll is a type of aircraft motion, consisting of an out-of-phase combination of “tail-wagging” (yaw) and rocking from side to side (roll). Swept wings of commercial transport aircraft tend to increase the Dutch roll tendencies. This yaw-roll coupling usually is well damped by the installation of a yaw damper, but it nevertheless causes a slight motion of the stars in a long exposure. Dutch roll is most pronounced when shooting out of a side window and, depending on its strength, it can cause stars to appear as doughnuts instead of points.

Exposure time, therefore, usually is not limited by conventional star trailing, but by the rocking and rolling motion of the aircraft. Even though you may be sitting in a flying tracking mount, you have to keep your exposure time as short as possible.

For airborne astrophotography, I recommend having as little glass in the light path as possible. In other words: get rid of all your filters! For airborne astrophotography, however, you will hardly have the privilege to have an open hatch available, like in those professional flying observatories. Depending on where you sit, you will be shooting through thick glass or even some plastic. These layers not only can introduce distortions, but the windows are also very prone to reflections, mainly because you will always have some light in the cabin. There are two ways to try to avoid this:

– You can make a total fool out of yourself and hide under a blanket. This trick works surprisingly well, but your fellow passengers might consider your behavior extremely suspicious. I therefore strongly suggest informing your neighbors and the cabin crew about what you are planning to do. Furthermore, you better dress lightly, as it can get rather stuffy in the long run.

– You can use a lens skirt such as the Lenskirt XL. It is a flexible hood that you attach to the end of your camera lens and on the other side to the window with suction cups. It lets you breathe better and does not nearly look as silly as the blanket.

Most astrophotographers do not especially like the aircraft trails produced by the strobes, beacons, and navigation lights. They can be an even more significant nuisance when shooting out of the aircraft.

Unfortunately, you cannot merely ask the pilots to shut down all these lights, as they are essential for flight safety. You have to live with them. The red and green navigation lights on the wingtips usually are not a problem, and the strobe lights can even have a pleasing effect. The biggest challenge is the red beacon light which tends to cast an ugly red hue. Fortunately, you can correct this during post-processing, or you can also try to use the light for something creative.

You are undoubtedly aware that it is not best practice to handhold your camera for long exposures, but if you have no other option, you might as well give it a try. In this case, try to press your lens to the window and operate your shutter with a self-timer or a cable release.

A better solution is to use a tripod to position your camera correctly, but depending on how tightly packed the seats are, you might have a hard time to set it up.

There is a massive selection of different suction mount models with one, two, or three legs. My preferred way is to use a Delkin Devices Fat Gecko Triple Mount. This 3-cup model is the most stable. You can also remove one cup to convert it to the 2-cup model if needed.

Of course, I have the privilege to have big windows in the flight deck, but with the larger cabin windows of the new generation of airliners, you might be able to install one of these in the passenger cabin as well.

One word of caution: Boeing’s new 787 Dreamliner not only ditches classic small windows with pull-down plastic shades and replaces them with large, dimming windows that can be adjusted to let in various amounts of light. These windows can be individually controlled by the passengers, but the flight attendants can also change entire sections of the plane. I know that certain airlines are remotely dimming all windows during night flights to avoid stray light entering the cabin. You may, therefore, have to convince your cabin crew to give you control over your window.

As mentioned above, for airborne astrophotography, you will have to keep your exposure time as short as possible. A fast lens will help you to gather as much light as possible in the short time available, but you will also have to increase your ISO as high as practical. I use a Canon EOS 6D with a 24mm f/1.4 prime lens and expose for 5sec @ ISO6400. Depending on your lens and camera, you will have to adapt to these settings, but try to keep exposure times short.

Nevertheless, most of your images will inevitably be blurred. In reasonably smooth conditions, I usually get only about 2 – 5% sharp exposures. That means that you’ll have to acquire a long sequence to ensure that you get a few keepers.

High ISO Comes With A Price

High ISO shooting comes at the price of increased noise. As in terrestrial astrophotography, stacking several exposures helps to lower these noise levels. Unfortunately, it is much harder to get a sequence of clean exposures for stacking from an airplane, but as you will capture a long series anyway, check if you have several good shots that can be stacked. For this, you only need the exposures to be sharp, as you can align the stars with specialized software like Sequator (PC) or Starry Landscape Stacker (MAC).

If the conditions are too turbulent for stills, consider capturing an extended sequence, and make a time-lapse movie. The high frame rate and the lower resolution of a video will hide much of the blur in each individual frame, and fast-moving lights and clouds guarantee a stunning sight.

As in terrestrial nightscapes, the Milky Way is the most prominent target, but there are other exciting things out there. Northern lights, thunderstorms, or constellations can keep you shooting on every night flight without the need for onboard entertainment.

Give Airborne Astrophotography a Try

Take your camera and have fun on your flights! I wish you a smooth ride.

You can see more of Ralf’s awesome airborne astrophotography by visiting his gallery here at MilkyWayPhotographers.com. 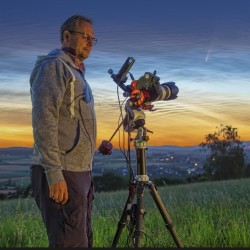 Ralf Rohner
With over 25 years of experience as a professional airline pilot and as an avid amateur nightscape photographer, I am equally at home both in aviation and in astrophotography.

Presently I fly as a Captain on the Boeing 777-300ER for Swiss International Airlines Ltd., the national carrier of my home country Switzerland.

I started photography during the film age and expanded into deep sky imaging at the beginning of the millenium. In 2015 I went the "wrong" way and "downgraded" to nightscape photography because I not only love the stats but also like visiting great landscapes. So this was the logical path.

During my night flights, I have been pushing the limits and quality of my airborne astrophotography out of fast-flying jet airplanes.